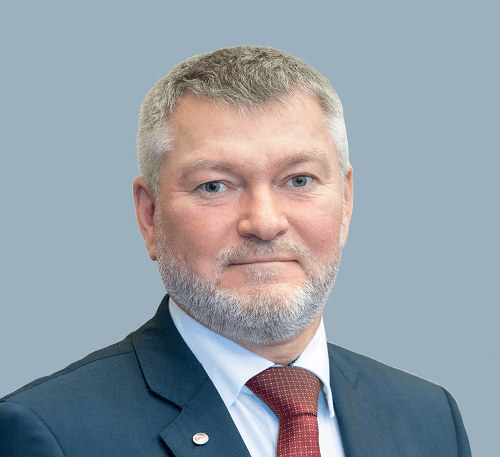 Russian Railways enjoys a long-standing status of an international company with a nearly global presence. We operate in more than 40 countries. This image is complemented by decent financial results that are significant both for the Company and our country. The Group’s projects are socially-oriented as all the products and services we sell abroad seek to improve the quality of living for local residents.”
Sergey Pavlov First Deputy CEO of Russian Railways

Russian Railways plans to continue developing its foreign business, among other things, by expanding its footprint and promoting the Group’s export-oriented portfolio centred around:

The long-term priorities of Russian Railways’ business abroad are outlined in the Foreign Operations Strategy approved by the Company’s Management Board. The Strategy was aligned with the Long-Term Development Programme. All targets set for the reporting period were achieved.

In 2019, revenue from foreign operationsIncluding the standalone results of RZD Logistics (container shipment and international transport corridor logistics), TransContainer (international transportation), UTLC ERA, GEFCO, RasonConTrans, South Caucasus Railway, and RZD International, as well as income from transit shipments generated by Russian Railways’ Centre for Corporate Transport Services. totalled RUB 489.8 bn (up 3.8% vs 2018 and up 3.1% vs the Long-Term Development Programme target) or nearly 20% of the Group’s profit, which is made up of three major elements: transit shipments, international logistics and overseas infrastructure projects. EBITDA exceeded RUB 41.5 bn (up 12.8% vs the target).

The Company’s brand covers innovative competencies and state-of-the-art engineering technologies, and complementary services such as consulting (including feasibility studies and railway development programmes), supplies of equipment and rolling stock, and employee training. Russian Railways diversifies its income sources by promoting domestic products and related services in the rail industry. The Company’s export portfolio includes all kinds of products and services to create an efficient railway network.

The Council for Rail Transport of the Commonwealth Member States (the “Council”) remains the key international interagency body ensuring technological continuity and practical interaction across the 1,520 mm gauge network. The networks of the Council’s member countries are used to transport 2 Bt of cargo and 18.6 m people each year.

In 2019, the Council expanded its geography. At its 71st meeting, representatives of Mongolia and Turkey railway administrations sat in as special guests. The two agencies are considering joining the Council.

UTLC Eurasian Rail Alliance (UTLC ERA), a project that is being successfully implemented jointly with the Company’s Belarus and Kazakhstan partners, aims to boost transit transportation between China and Europe. In 2019, the total container volumes transported using the UTLC ERA services exceeded 333,000 TEU, up 18.7% y-o-y.

Over 3,100 container trains ran on the main UTLC ERA routes.

Together with Belarusian Railway, Russian Railways developed an action plan to establish daytime (high-speed) passenger transportation between Moscow and Minsk, with the first trains slated to run at the end of 2020.

As part of developing the International North–South Transport Corridor (INSTC), the Company signed memorandums with Azerbaijan’s and Turkey’s railway operators to promote transit transportation services and implementation of joint projects.

The Company continued to honour its commitments under a concession agreement to manage the Armenian Railways. The key operational and financial indicators of South Caucasus Railway are growing consistently, many of them having reached record-high values for the company. In 2019, the freight and passenger turnover increased by over 8% (upwards of 790 m tkm) and by 14% (to 68 m pkm) respectively. Following its investment programme, Russian Railways is renewing its railcar fleet.

In 2019, Russian Railways continued its work to expand transit traffic along the China–Europe route, which included developing railway border checkpoints. The Company is leveraging its strategic partnership with Ulaanbaatar Railways (Mongolia), a stake in which has been under the Company’s trust management since December 2009. This has been a fruitful relationship that saw schedule speeds rise along with throughput and carrying capacities, and on top of that traffic has been steadily increasing since 2010. In 2019, a new milestone was achieved when freight transportation reached 28.1 mt (up 9.2% y-o-y).

Higher volumes necessitate further railway development, including its infrastructure and fixed assets. To that end, Ulaanbaatar Railways’ Management Board has developed and approved a priority action plan to increase the throughput capacity as part of the operator’s modernisation and long-term development programme until 2030. In addition, Russian Railways takes an active part in implementing the programme to establish the Russia–Mongolia–China economic corridor.

On the East–West side, the Company joined efforts with partners to unlock the significant potential in the Japan and South Korea markets. It launched and worked on developing a service to transport transit shipments from Japan to Europe using the Trans-Siberian Railway. In order to strengthen the Company’s presence in the region and coordinate the work with potential shippers, Russian Railways decided to open a representative office in Japan.

The Company is also fostering its cooperation with South Korea. In 2019, the Russian Railways Group and FESCO partnered with a South Korean company Pantos to launch a multimodal transit service for fast transportation of containerised cargo to Europe via the Commercial Port of Vladivostok.

Russian Railways and Yingkou Port Group Corporation continued to work under their cooperation agreement to develop the Bely Rast terminal and logistics centre.

The Company is also coordinating the implementation of the Khasan-Rajin project and supports the operation of the RasonConTrans JV.

In 2019, the Group strengthened its positions on the Western European market by signing a number of documents with the leading European railway companies.

To accommodate and capitalise on the steadily rising demand for the Sapsan high-speed electric train service, as well as the overall growth of passenger traffic between Moscow and St Petersburg across all transport types, Russian Railways, Siemens Mobility GmbH and Ural Locomotives entered into an agreement for the manufacture of additional Sapsan trains, signing the document on the sidelines of the St Petersburg International Economic Forum. The Company also signed a cooperation agreement with Sinara Group and Siemens Mobility GmbH in the field of engineering consulting that envisions the creation of an engineering centre for innovative technical and technological solutions.

o fair of railroad machinery and technologies designed for the 1,520 track gauge, Russian Railways and the consortium German Initiative for High-Speed Transportation in Russia signed a memorandum of cooperation on the design and implementation of the Moscow–St Petersburg high-speed railway.

Russian Railways kept up the joint efforts to create a new Eurasian transport corridor extending the broad gauge tracks to Bratislava and Vienna and establishing a Vienna–Bratislava international logistics centre. Currently, the third stage of the feasibility study has been completed. The state and municipal authorities of Austria and Slovakia are conducting environmental certification.

In 2019, Russian Railways continued its work with the Organisation for Cooperation between Railways (OSJD) to draft regulations on international cargo and passenger transportation. On 1 July 2019, amendments to the Agreement on International Goods Transport by Rail (SMGS) went into effect. These changes were related to the review of complaints in respect of transportation using electronic documents. The electronic CIM/SMGS consignment note was introduced. These amendments will help bring information technologies to transportation and embrace paperless processes.

In June 2019, a decision was made to set up the OSJD Academy. To that end, Russian Railways implemented two pilot projects utilising the OSJD’s regulatory framework. There are currently talks to create competency centres in the OSJD member countries. As part of the International Diplomatic Conference and under the auspices of the OSJD, the work on the adoption of the main text of the Convention on Direct International Railway Traffic was almost completed. Russian Railways spearheaded the efforts to develop its provisions.

Another important highlight is that during a UNECE Inland Transport Committee (ITC) session of February 2019 the text of the Convention on the Facilitation of Border Crossing Procedures for Passengers, Luggage and Load-Luggage carried in International Traffic by Rail was adopted and opened for signing to countries starting April 2019. The document is the result of work started at Russian Railways’ initiative.

In 2019, the Russian Railways Group continued active cooperation with the International Union of Railways (UIC), including as part of its European and Asia-Pacific Regional Assemblies. The highlight of that cooperation was Russian Railways’ UIC Day on 1 October 2019 in Moscow, when the heads of the Company’s departments and the Group’s business units met with all directors of the UIC headquarters. The resulting roadmap of further cooperation outlined the areas and format of future interactions.

In early 2019, RZD International (a controlled entity of Russian Railways) and Serbian Railways Infrastructure signed a new contract for the design and construction of railway infrastructure and a single dispatch centre for train traffic control in Serbia.

In India, a feasibility study was completed for a project to increase train speed on the Nagpur–Secunderabad line. As the next step, the preparation of an intergovernmental agreement was initiated to modernise this section.

In October 2019, Havana hosted the signing of a ten-year contract to reconstruct and modernise railway infrastructure in the Republic of Cuba for approximately EUR 1.9 bn.

In Mongolia, the Russian Railways Group embarked on a project to develop the Central Railway Corridor of the Russia–Mongolia–China corridor: first priority actions of a long-term modernisation and development programme until 2030 were approved to complete major track repairs and upgrade locomotives of Ulaanbaatar Railways until the end of 2020. In December 2019, a contract was signed for RZD International to provide technical consulting services for the construction of the Tavantolgoi–Dzunbayan line in Mongolia for EUR 2.34 m.

With projects in Mongolia and Armenia under its belt, the Company secured a global reputation for strong management of infrastructure assets, laying the foundation to penetrate new markets.

Work continued underway to create a new Eurasian transport corridor, which includes broad gauge railway extension to Bratislava and Vienna and construction of associated logistics infrastructure. The International Railway Congress in Vienna proved an effective venue to promote the project. As part of these efforts, the third phase of the feasibility study is now completed. Environmental impact assessments are underway at federal and municipal levels in Austria and Slovakia.

There are opportunities to expand cooperation with Vietnam, Brazil, Egypt and Saudi Arabia.

In 2020, the Russian Railways Group plans to add new projects to its overseas infrastructure portfolio and continue focusing on the key areas of its international operations by leveraging advanced competences and best practices.